Three day weekends are always a good time for road trips, and even though Indonesia celebrates their holidays on the holiday and not on Mondays like the U.S. we still manage to get some of them on a Friday or Monday.

This year Idul Adha was on Friday, so we headed out to Central Java and one of the world's largest Buddhist Temples therein... 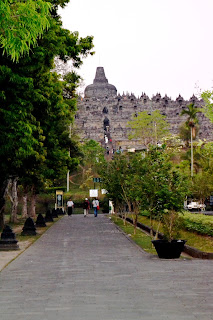 This sucker was built around the year 800.

And then when the Muslims moved down into Java, the Buddhists decamped for Bali and just left this giant temple behind to be swallowed up by the jungle.

Then the Colonial Dutch tripped over it, said "Whoa, this is really old!" and proceeded to make gifts of bits and pieces of it to the King of Siam.

Anyway... fast forward to the 20th century and Indonesian Independence.  They recognized Borobudur for what it is and asked UNESCO to help them with it.  UNESCO agreed and spent 7 years restoring it so Ted, me, and thousands of our closest friends could visit.

About two months after we moved here in 2010, Mount Merapi, an active volcano, erupted all over the temple and surrounding areas killing more than 350 people and displacing 100 times that many.  The temple was covered in ash and recovery was a slow and expensive one, but now things are back to normal (if you ignore the dead trees on some of the surrounding hillsides and the abandoned villages in the new 'dead zone').

Merapi frequently spends its time shrouded in cloud cover, and this weekend was no exception, so while we hoped for a little thrill from a smoking burping volcano, we got nothin'.

But we were in a good position for Borobudur.  Our stupendously overpriced hotel placed us directly in the path of the temple... 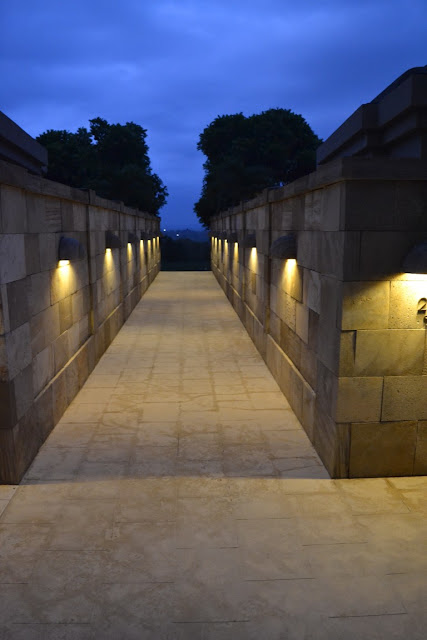 ...standing on the walkways between bungalows and looking out past the hotel property, there is a bump dead center between the walls.  That, my friends, is Borobudur.

Our plan was to get up before the roosters and join all the other dumbasses who trek to the temple in the dark so they can be in place, at the top of the temple, for the sunrise.

For this privilege(!) we paid extra, over and above the normal entrance fee.

My only comment here is to remind you of our friend P.T. Barnum and his famous quote.

To be fair to ourselves, though, there was a slight benefit to falling for the Dawn At Borobudur hype- the temperature was in the mid 70s and the crowds were never going to be thinner than they were at dawn, but still...

Suckers Unite and keep telling people how awesome it was so no one will find out that you have more money than brains.  :)

But the temple itself... now that is worth the effort. 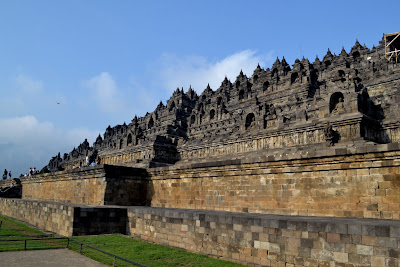 This is a side view of the temple.  The stairs go straight up the middle...

Standing closer and looking up at the temple... 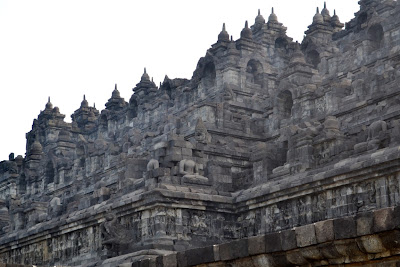 And a detail of the stairs... 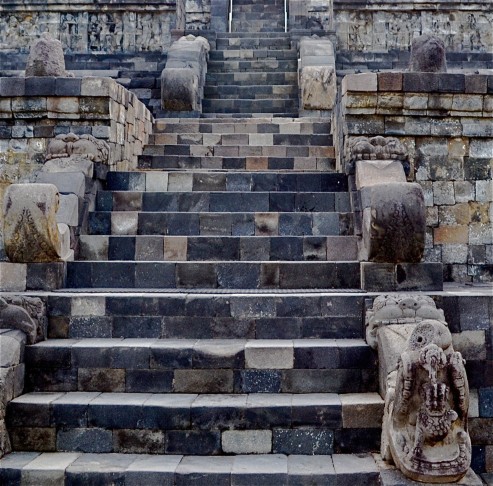 Let me just point out that the stairs are neither uniform, nor OSHA approved.

While I was later able to appreciate the engineering and artistic accomplishments of the builders, on my intitial climb to the fifth level of the temple I was simply a blithering, swearing, bag of sweat, cursing the man who thought the two block high steps were a good idea.

Some of these steps were mid calf in height on me and I'm six feet tall! The people who built and worshipped here were substantially shorter than me.  They still are.  How on earth did they make this climb?

I think this must be some Buddhist test of enlightenment, and I failed miserably.  Ted had to reach behind himself more than once and offer his hand (attached to a strong arm and back) to help haul my sorry butt up these stairs (remember, these are just some of the stairs for ONE level and there are FIVE levels in total).

Once you reach the top, you are treated to "stupas" or as we called them "Buddhas in a Bell". 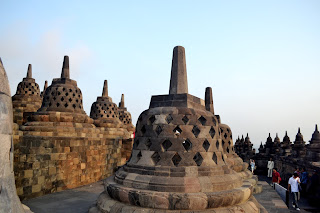 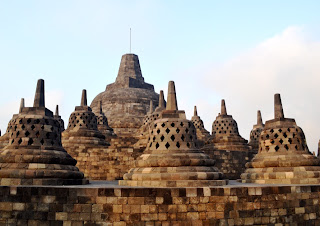 Each of these stupas contains a Buddha statue. 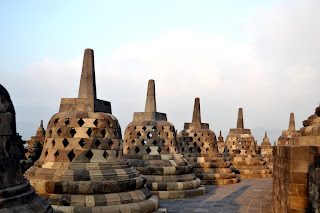 And looking out beyond the stupas is fairly rewarding also... 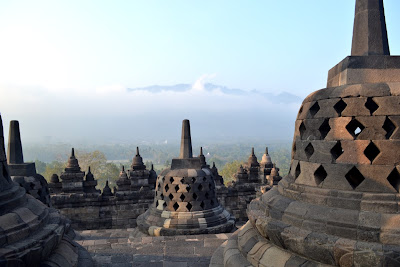 Here's some details of the Buddhas in a Bell... 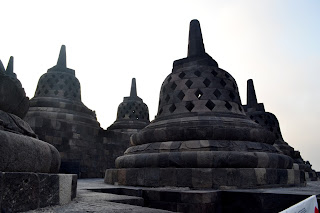 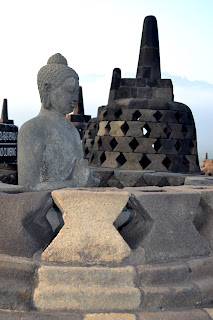 Of course, as with any shrine/edifice/historic monument there is a need to place signs... in this case DILARANG MEMANJAT (dee-lah-rang mem-ahn-jaht) reminding people not to climb on the antiquities.

Does it have any better effect on Indonesians than it does on Americans or Germans or Africans?  Nope.

Thankfully, while we were there all the people who got yelled at for climbing were not pale faced tourists, but Indonesians.  It's somehow better when foreigners aren't the ones who are badly behaved...

The very tippy top of the temple is a larger stupa that is supposed to harbor an unfinished Buddha (symbolic of the unfinished trip down the path of enlightenment)... 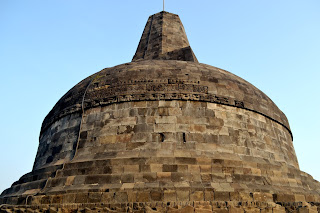 ...but which is empty.  No one is sure why it's empty or how long it's been empty because the first guy to trip over the temple didn't bother to write down anything he saw or found.  :(

Now. Aside from the B-in-Bs there are tons of Buddhas just hanging out on the temple in six different hand postures denoting everything from charity to courage to the turning of the wheel of dharma. 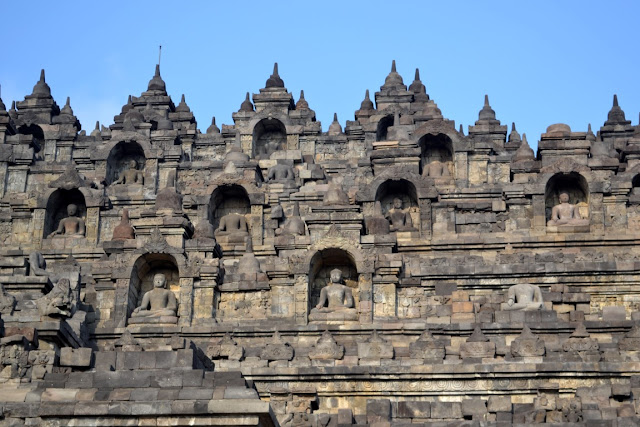 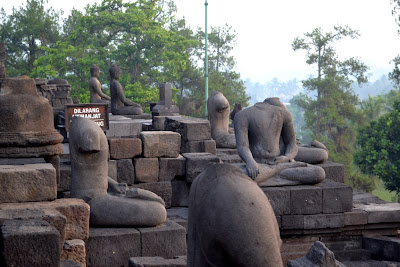 Some heads fall off. Some are given as presents by people to whom they didn't belong in the first place.  Some just disappear.


And lots of lions, who are supposed to fly you to Nirvana except wings are hard to carve so they don't have any... 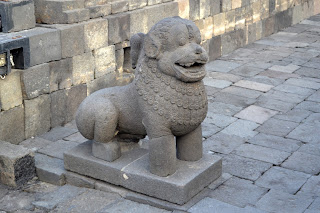 So if you are Buddhist and are here to worship, you can walk clockwise around the five levels of the temple, keeping the temple wall on your right, and see the whole story of the Buddha's life in carved relief panels. 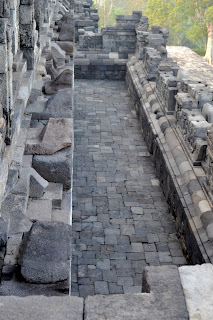 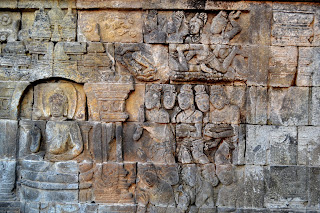 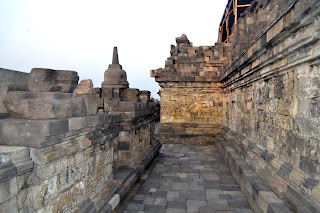 There is a serious amount of information contained in this 1200 year old structure.


And no trip would be complete without some engineering wonder for my own personal enginerd, so I present to you the method employed to keep these stones together through earthquakes, rain, volcanoes and subsidence: 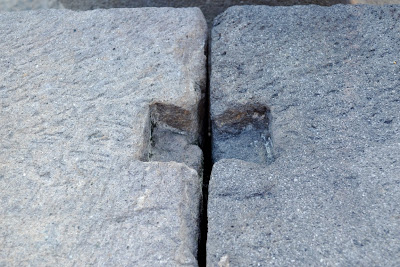 They notch the stones and connect them with a butterfly stone, thus holding them tight together.

The final fascination at the temple was the "Hidden Foot".  This is the base of the temple, the foundation for the five levels of enlightenment, and the panels on this level all depict the many many ways that humans can screw up their path to Nirvana.

This level is supposedly lousy with pictures of all kinds of debauchery and pirate behavior- the level we are pretty sure we occupy on the path to enlightenment.

But we are not allowed to see the panels on this level because ages ago, the Head Guy of the Province the temple is located in apparently thought they would incite naughtiness or encourage us to try new things in a sort of historical JackAss prequel and had them covered up... 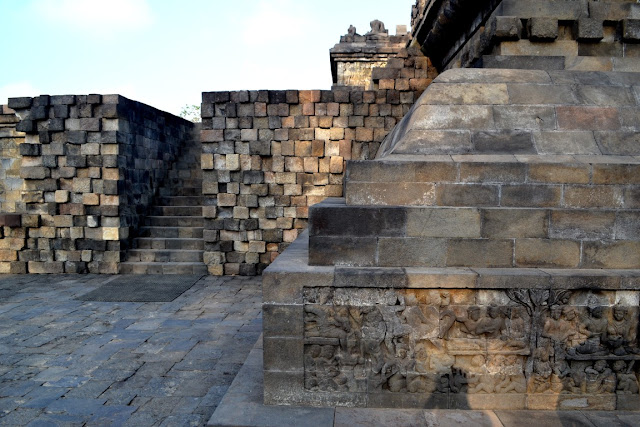 So on one tiny corner of the temple, they have uncovered some of the panels from the hidden foot (presumably not the naughtiest bits) to show a cutaway of the structure.

The stones in the center of the picture that look like stacked RR ties have been cut to show the Hidden Foot, but normally are continuous around the base of the temple, covering the panels from sight.

And there you have it!

Later that day we found some elephants to ride, and did.

Here's my scale model on his elephant "Eta",


And lest you think we spent all our time being culturally enlightened, never fear!

The hotel offered us the opportunity to knock back a few local Soursop martinis while lounging in the rice paddies (and yes, we know that isn't rice... it's out of season.  We didn't care.)

So as a farewell photo, I give you my Scale Model kicking back after the first of his three (3) martinis. 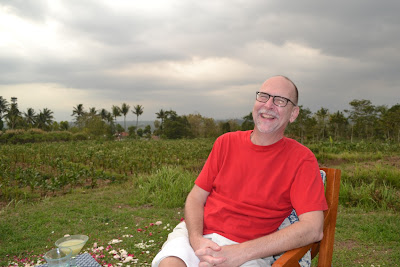 I know I certainly feel enlightened just through you! Built in 800... the mind boggles. Tell your enginerd I send my best to him and always, to you. :)