Well, we did it.  We finally went to a Velvet Class movie.

I have touched on the movies in Jakarta before... we are pleased and surprised at how quickly (sometimes simultaneously) big U.S. flicks show up on Indonesian screens, plus we pay very little for tickets and less than that for food- of which there is a great variety.

Once, a long time ago, we bought tickets for Satin Class, which basically gets you a La-Z-Boy on the mezzanine of a regular movie.

Not too exciting and you end up sitting with a big fat end table between you and your boyfriend which is NOT good.

But today we went to the movies.  It was 1pm on a Sunday, and we could do Velvet Class or wait until 2pm.

We decided it was time to do Velvet Class.

Velvet Class is basically a big bed slapped down in a regular stadium theater along with a buncha other big beds.

Until now, we have avoided it for two main reasons:

2- We are older and any kind of squishy reclining tends to make us take a nap, thus cancelling out the purpose of being at the movies.

But today, we felt brave and awake and decided it was time to go for it.

Now, Velvet Class is shockingly expensive... $14 for each ticket.  To New Yorkers that probably sounds like a bargain, but in the rest of the U.S. that's still a pretty pricey ticket, and to Jakartans it's three times what they normally pay.

What that got us was two tickets to Hedonism Indonesian style, plus a movie.

We were escorted back to the Velvet Class Lounge where you can sit in comfy upholstered chairs and wait for the theater to be ready.  In this lounge are TVs and a snack bar, along with private bathrooms.

From there you go into the theater which has a capacity of about 45-50 people.  Three or four lounges (beds) per row and about 5 rows.  That's it.  In the whole theater.  With a regular big sized screen (not a multi-plex mini screen).

This is a picture from the theater website because the pictures we took with Ted's phone were really bad... 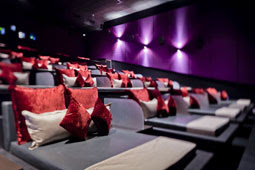 There is a hostess who checks your tickets to make sure you paid, and then she whips out a blanket and asks permission to open it for you and spread it on your legs.

Each person has a little nightstand area to put Cokes and whatever else you like, and there is a button on one side to call the hostess if you would like something (fer instance, she will bring food on china and set it up on small tray tables that sit on your bed).

The beds themselves have two giant floor type pillows, one long bolster and two throw pillows, all in velvet, of course.  So we mushed those around until we were nice and comfy and settled in to watch our movie.

The movie was 2 hours 8 minutes long and we were just fine.  No fidgeting in narrow seats, no crowds eating and talking all around us, no nothing.  Just the best date ever, slap in the middle of a Sunday afternoon at the movies.

And lest your mind is tending to the gutter, they remind you three or four different ways that the theater has CCTV and leave you to connect those dots.

When we leave here, no theater in America is going to let me watch movies while reclining on a giant square sofa with velvet pillows while a hostess brings me food... and that's going to make me cranky.
Posted by Leanne at 08:30 3 comments: