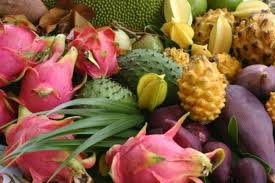 Living in a country with a Muslim majority can be a little tiring for someone not used to the traditions, but nothing really outrageous.

Getting bacon should be trickier than it is... but we can find pork products fairly easily, although they are usually banished to a special area.

Each Mahjid (Mosque) tries to outdo the other during the 5 times daily prayers, so they all get loudspeakers and broadcast the call to prayer.

Except they don't start at the same time, and they don't all sing on key.  So you have a cacophony instead of a respectful call to piety.

I really like muezzin calls, just not the wailing ones jumbled into a ball with four others all starting within 30 seconds of each other being blasted over cut rate loudspeakers.

Good news: can't hear them in my bedroom, so there is sanctuary.
Occasionally, the politics of religion rears it's spectacularly ugly head and we have to deal with fanatics (which come in all religious shapes and sizes, they just happen to be Muslim here...) who defy the government authorities and make minor trouble for everyone just to be cussed, blocking off streets on their own initiative or blaring intolerant sermons over their tacky speakers, or just being bad humans- but that's not unique to this location.
Although it can be more difficult in a foreign location just because we aren't native to this culture and have no say in the laws and consequences of this nation, so we must just watch, and learn, and try not to judge.
Too much.
Meanwhile...

Water is another stumbling block.

In Africa I used the tap water to cook with if I was boiling it- like pasta or potatoes, but here I don't ever use it except to shower and brush my teeth and the use for teeth brushing often brings gasps of horror from a lot of expats.
Our dishwasher temp control is set to Hot Lava. We hope that’s sufficient.

Our water comes from a well and the well is supplied by groundwater which runs through god knows what to get here.
Okay, god knows some of it.  And unfortunately so do we.

Human waste, compost, litter, animal waste, decomposing animals, garbage, chemicals... you get the idea. Theoretically it gets filtered, a little, by nature... but...

And it's got a nice sulfur component to remind you just in case you get lax and think about using it casually.

So what's the good stuff about Indonesia you are asking?
A lot.
Truly.  :-)
Unless they are driving, the people here are kind and helpful, gentle and quiet- anger and loud voices are considered bad form and that's a truly nice way to live.
The other day at lunch we saw a man who was very angry because he made a request that wasn't honored.  He was livid and showed it to the restaurant employee by silently pointing very hard at the perpetrator of his ire, and then speaking so softly that we couldn't hear him from 5 feet away.
His friend came and retrieved him to calm him down, embarrassed at the ostentatious display.  Pointing is a no-no and using it as he did showed his extreme displeasure.

(That makes loud, complaining expats all that much harder to endure for us, but life goes on- because the angry entitled expats surely will...)
And Indonesia delivers anything you want.

Food, clothes, gasoline, you name it.

I once had beanbag beans delivered so I could re-stuff Elliot's bed.  Cost me an extra buck on top of the price of beans.

You can have groceries delivered or restaurant food or catered food.  Even McDonalds delivers here.  There is no mail service (or even reliable addresses) but if you buy something, they will send it to you on a motorbike, damn the size.  So you will see motorbikes with precarious loads fairly often on the roads, just to add to the joy and hilarity.

A truck comes every Friday with my four 5 gallon bottles of clean water from the local Coca Cola bottler.  They cost me about a dollar apiece and the delivery is free.

We get most of the big Hollywood movies within a week or so after the U.S. release.  Except they cost about $10 for both of us.

On a Friday night.

And the food concession at our movies has popcorn (sweet OR salty) and coke plus hot dogs, but they also have sandwiches, spring rolls, french fries, cheese breads, hamburgers, pizza and tons more- and a typical popcorn/coke/hot dog combo will cost you about $3, I kid you not.   If you would like to be more comfy while you watch your movie, you can spend an extra buck and get La-Z-Boy recliners with little tables between them for your inexpensive food (which will be delivered after the movie starts) and if you want to be at home while you watch your movie, they will put you in Velvet Class which is a nice comfy double bed with pillows.

Ted and I do not do this because it's hard enough for older people to stay awake as it is.

We've got tropical fruit like you wouldn't believe, although here they just call it... fruit.

The previously blogged Durian notwithstanding, we get so much really good fruit at cheap prices we practically bathe in it.  Dragonfruit, mango, papaya, pineapple, melons, rambutan, star fruit, and on and on.

So the cultural differences are why we come, because they put the spice in life, and the cultural positives are why we stay because they make life pleasant, and when we notice the tap water is a little brown, or the traffic makes us late...again, we remember the things that annoyed us at our last 14 locations and try to be thankful for not having those anymore.

No place is perfect (or if it is, we haven't found it yet!), but all places are interesting in their own way so... challenge accepted! 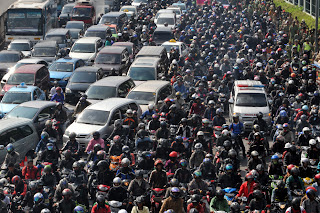 Traffic.  Traffic jam.  Macet (mah-chet).  It's a fact of life here, and epic in its proportions.  I wish I could say that this is only a picture of rush hour traffic.  But I could only do that if by 'rush hour' you mean anytime between 7a.m and 10p.m., seven days a week.
Frustrating.  Selfish.  Thoughtless.  Lawless.  It's so bad that the company provides a car and driver and requests that we never use one without the other.
It's so bad that even after driving for years in the demolition derby that was Africa, we aren't even tempted to get behind the wheel of a car.
I am never in the car without a book.  I don't look up, I don't backseat drive, I try very hard to be NOT IN THE CAR.  It has the same chaotic components of Africa, but much worse due to sheer numbers and the addition of motor bikes by the thousands.

All the people in the cars are very very important and have to be wherever they are going first, or at least before you.  Common sense, common courtesy, rule of law, and safe driving practices go right out the window as soon as an Indonesian starts his car.

Need to turn left from the right lane?  No time like the present.

Need to turn onto a street, but stopped by a line of cars coming off the street? No problem, just turn into the wrong lane and shimmy over later.

Don't want to stop when the light turns red?  Okay.
What are those lines in the street? It's like they are there to keep me from making a new lane to drive in, and that's just stoopid!

Add to this the thousands of motorbikes who weave, drive on the wrong side of the road, ignore traffic signals of every color, and swarm through stopped car traffic like a machine made ooze  and you have a recipe for frustration, anger and tons of wasted time.

Ted sits there and stews.
He watches, he gets indignant and he itches to ram the whole mess with a Bradley tank, but all it does is feed his ulcer.  I have extolled the virtues of books and being NOT IN THE CAR, but he just can't seem to let it go.

The company requires our drivers to learn and follow safe driving practices, but that mostly covers safety of the vehicle and occupants, not what we would call defensive driving.
We have given our driver a letter outlining the things we would like to have him do- over and above the company regs, and he has made a valiant effort to comply, although he isn't completely on board.

We asked him to stop or at least slow for pedestrians instead of playing Carmageddon.

We asked him to allow other cars to pull in front of us as they exit parking lots and side streets. You know... when you wave someone out?  Unheard of here.  Crazy foreigners and their crazy ideas.  Why would anyone do that when we are all so important and have places to be...?

We asked him be courteous to other drivers even if it took longer to get where we were going.

He thanked us for being crazy...er...helpful to him in his job and we've moved on with a kind of half-assed courtesy and patience policy that still makes him the most courteous driver in Jakarta.
I will not test your patience with my traffic whining by including stories about what happens when there is rain/hujan (hoo-john) and the streets flood/banjir (bahn-jeer).

Bottom line: we both drove cars in Africa where the traffic is legendarily bad.  We do not drive cars here.

Although we are still thinking about getting a scooter and becoming part of the ooze... (don't tell the company).