Jakarta is such a huge sprawl of cement and buildings with tiny little parks scattered around, it's easy to forget that most of Indonesia, including our island of Java, is chock full of nature.
About 70 miles south of Jakarta is Bogor, which the Dutch colonials discovered was cooler and cleaner than Jakarta and scurried down there to build themselves some vacation homes.  A couple hundred years haven't really been kind to a lot of the places the Dutch colonials "discovered", so Bogor feels neither cleaner nor cooler, but that's another story...
In any case, Bogor contains a really swell botanical garden, started by the aforementioned Dutch.
It's almost 200 acres of grass, trees, water, and flowers, and we are told that it's a terrific place for botanists.  Since between the two of us we can just about tell the difference between a palm tree and a pine tree, Ted and I have just accepted that it's an even sweller place for people who know what they're looking at.
Kebun Raya is Indonesian for Botanical Garden, but the literal translation is "Great Garden", since raya can be used for many things, among them streets (Kemang Raya is a large, busy street near our house and raya translates more like "highway" although that is a spectacularly ambitious name for a two or three lane commercial roadway). But Kebun always means garden (or farm or something growing), and the words are pronounced keh-boon rye-uh.
And now you know more Bahasa Indonesia.
We got a fairly early start on the day, for us, but circumstances conspired to keep us from spending nearly enough time in the gardens.  Traffic was a little worse than usual getting down there (we thought maybe it was holiday related, but it turns out it was Annoying Singing Twerp related- unbeknownst to us, Justin Bieber was appearing in a venue between Jakarta and Bogor that day- and it took us more than twice as long to get there and home as a result.)
Anyway, we got to Bogor about an hour after we had hoped to, and then Ivan, our driver, got lost a little bit.  We spent way too much time touring Bogor and its environs until Ivan sheepishly said "Sorry Pak, saya berbalik."  He needed to u-turn and go back a fairly long way in fairly heavy traffic.
Oh well.  We've never been to Bogor, so we continued to enjoy the sights out of the windows, telling ourselves that if we had driven ourselves, the 200 acres of nature in the city center would have eluded us, too.  Bigger things have eluded us way too many times, so we tend to be very calm about Ivan's 'shortcuts'.
So.  We finally get to the gardens, get in the gates, pay for all three of us plus the car, and it's already 12:30 (we left the house at 9).  Ted and I are starving, which basically means we are awake, so we wander off in search of the single restaurant located in the park.  After hiking up a driveway with a 15% incline (actually I'm sure it was more, but Ted scoffs), we plopped ourselves down at a terrace table and ordered some food and water.
This is the view from our table... 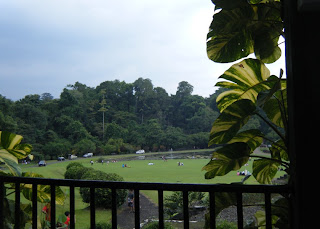 ...which was very nice.
And a good thing it was too, since after our very pleasant waitress took our order and disappeared, she reappeared to tell Ted that his salad choice was no longer available, but she brought the menu back to help him out.
He opened the menu to the salad page and pointed to a different salad.
Our waitress managed a sincerely sad face and pronounced it "habis" (hah-bee-s).
That's Indonesian for "all gone".
She cheerfully tapped each salad entry except the fruit salad, saying "habis" each time until her silly, deluded patron agreed that perhaps he would like... the fruit salad.  Problem solved.
Until she came back and told me that my chicken breast sandwich would come with chicken breast and sandwich bread, but no tomato, no lettuce, no nothing.  I agreed to the new sandwich description and she disappeared again.
Some time later she arrived with our cold bottles of water, and we spent the next half hour watching the cold condense on the bottles and then run off onto the table.
A full hour after we ordered, our food arrived.  My sandwich fairly bristled with lettuce and tomatoes.
I just smiled and thanked her.
And it was a delicious sandwich.
Approximately halfway through our sandwiches, the fruit salads arrived (I had ordered one from the beginning so Ted was just catching up when he ordered his).
Also delicious.
And the water was still a little colder than the air...
Anyway- it was hardly the stuff of which tragic operas are made.  Lunch was a little slow- no big deal.
Except.
Except we left the house mid morning, we hit weird traffic thanks to the Annoying Singing Twerp, and Ivan got good and lost.
That all added up to a very late start exploring our 200 acre natural wonderland.  But them's the breaks, so we headed down the trail, rested and ready.
After we walked off the manicured lawn in front of the restaurant, we were on this roadway... 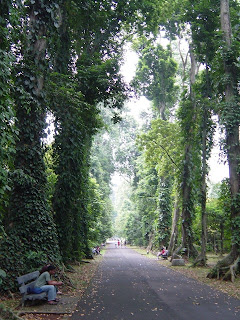 And it didn't take us long to find this tree, 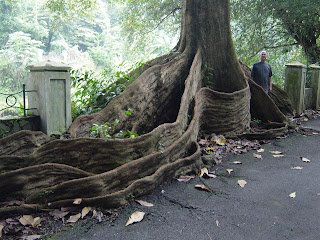 (scale model in top right corner)
Or this tree, 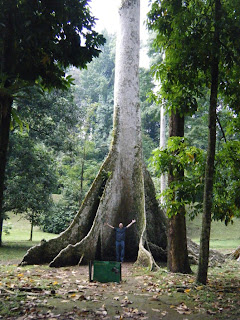 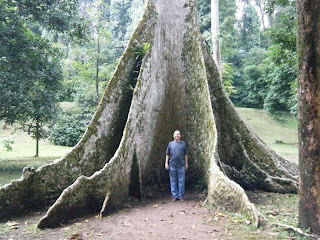 (closer shot of my scale model and his tree)
These were just two of the really cool trees we know are all over the gardens, but we didn't get to them so you will have to wait to see them, just as we do.  Our delays become your delays.
But we did see some other good stuff.
I am fond of irises.  My Mom used to grow them, and we had spectacular purple blossoms every spring with the occasional white renegade thrown in.  But I have never seen orange and yellow, until now. 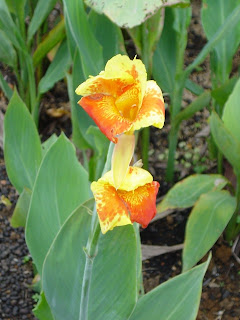 Is that not gorgeous?
And if you are a gardener or botanist or other smarty pants type person and decide this is not an Iris, I don't care.  The leaves look like Iris leaves, the flowers look like Iris flowers, and I don't care to be confused by stupid facts, so don't even try.
Onward.
The Ciliwung (chill-i-woong) River runs through Bogor and the Gardens.  This is the river that runs through Jakarta and into the ocean.  It starts at Puncak (a little farther on from Bogor) and flows steadily getting filthier and more clogged with crap (both literal and figurative) as it goes.
I had hoped that it would be a little nicer closer to the source, but no such luck.
Just try to ignore the color (I'm sure some of it is naturally occurring mud) and don't look too closely for piles of trash and detritus caught on snags (I tried to find a shot with as little garbage in it as possible)... 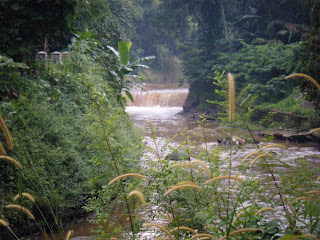 I am so fond of water, and keep finding myself living in places where oceans and lakes and rivers are used as toilets and garbage disposals.  It makes me sad, especially since there is a finite amount of stuff the oceans can absorb.  But as we walk along, guests in a country not our own, do we chastise local residents when we see them unwrap an ice cream bar and blithely drop the paper over the edge of the river bank?
I don't think it would make them stop littering, I just think it would make them dislike western tourists.
But as Ted and I stood and bellyached to each other about the terrible condition of the river, we remembered the same problems in Africa and felt small and helpless.
It bears more thinking about, for sure.
In any case, we did enjoy our tramp through the gardens, even when it started to sprinkle a little bit.
We were prepared for this, because Bogor gets about 65 inches of rain a year and it rains more than 250 days a year, hence the lush botanical gardens.
But we weren't prepared enough to dry off if we spent the afternoon slogging through puddles etc. so we started making our way back to the car as the rain steadily picked up speed and volume.
And thunder.
We were glad we came, but the thundery rain was kind of the last clue that perhaps we should cut our losses and live to fight another day.
We stopped on the way out to buy two beach balls with the Kebun Raya logo and location info printed on them (for one dollar apiece), and to take pictures of the deer who populate the lawns in front of the Presidential Palace (a place you cannot visit in groups of less than ten, and never with children). 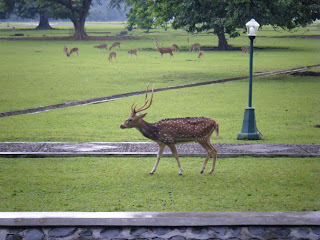 There are literally hundreds of them, and full grown deer with spots are new for me, so that was fun.  People feed them carrots and they just live on this big fat lawn in front of the Istana (Indonesian for "palace"- again, not so much.  But it is a real nice, real big white house used as a summer home by Dutch governors and then by the first President of Indonesia.  Maybe someday if we are a group of ten with no children, we will go see it).
So we hit the road in the rain and spent almost three hours trying to get home (note to self: check concert schedule at SICC before going to Bogor again) and we figure we got around to maybe 20 acres of the Kebun Raya.
Maybe.
If you count the stuff we could see without actually walking to it.
Good thing Bogor is close to home so we can try this again.
Posted by Leanne at 14:37 1 comment: